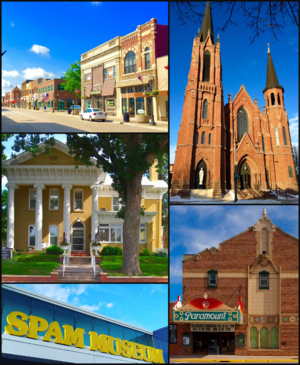 Austin is a city in Mower County, Minnesota, United States. The population was 24,718 at the 2010 census.[6] It is the county seat of Mower County.[7] The town was originally settled along the Cedar River and it has two artificial lakes called East Side Lake and Mill Pond. The town was named for Austin R. Nichols, the first settler in the area.[8]

Hormel Foods Corporation is the largest employer in Austin, and the town is sometimes called “SPAM Town USA”.[9] Austin is home to Hormel‘s corporate headquarters, a factory that makes most of North America’s SPAM tinned meat, and the Spam Museum. Austin is also home to the Hormel Institute, a leading cancer research institution operated by the University of Minnesota with significant support from the Mayo Clinic.[10]

Austin has been named one of the “Top 10 Affordable Small Towns Where You’d Actually Want to Live,”[11] as well as one of the “Best Small Cities in America” for 2015.[12]

Fertile land, trapping, and ease of access brought first trappers and then the early pioneers to this region. The rich gameland attracted a trapper named Austin Nichols, who built the first log cabin in 1853.[13] At that time there were “about twenty families in the area.”[8] More settlers began to arrive by wagon train in 1855, and by 1856, enough people were present to organize Mower County.[8] It was in 1856 that the settlement adopted the name Austin, in honor of its first settler. That year the first hotel opened to travelers and the first physician moved to town, Dr. Ormanzo Allen. The first newspaper, the Mower County Mirror, was started in 1858.[8]

Mills, powered by the Cedar River, were the first industries in Austin. They provided much-needed flour and lumber for the growing village. Growth was slow during the first two decades, but the Chicago, Milwaukee, and St. Paul railroad arrived in the late 1860s, hastening economic development.[8] The town’s first schoolhouse was constructed in 1865 and the first bank opened its doors the following year.

Austin received its first college in 1897 when the Southern Minnesota Normal College and Austin School of Commerce were opened by Charles Boostrom. The college closed in 1925 and the city was without an institution of higher education until Austin Junior College opened in 1940 (In 1964 it became part of the State College and University System and is now Riverland Community College).

A 50-acre parcel of land was made into Horace Austin State Park by the Minnesota Legislature in 1913. At the time, the land was “one of the beauty spots of Southern Minnesota, but of late years has not been cared for and in places the banks have been disfigured by dumping along the shore of the stream,” according to the bill’s author, Senator Charles F. Cook.[16] The park was converted to a state “scenic wayside” in 1937, then transferred to city ownership in 1949.

In the 1930s, Austin Acres was built with funding from the Subsistence Homesteads Division of the Department of the Interior,[17] and the Austin Parks Board was formed in the 1940s to oversee the growing number of green spaces within the city.

In August 1985, 1,500 Hormel meatpackers went on strike at the Austin plant after management demanded a 23% cut in wages. A protracted battle between union employees and Hormel continued until June 1986, one of the longest labor struggles of the 1980s. In January 1986, some workers crossed the picket lines, leading to riots; the conflict escalated to such a point that the National Guard was called in by governor Rudy Perpich to keep the peace.[18] The strike received media attention on a national level and a documentary film, American Dream, was made during the ten-month long conflict. The movie was released in 1990 and went on to win the Best Documentary Feature at the 63rd Annual Academy Awards.[19] A song about the strike, entitled “P-9”, was written by Dave Pirner of the Minneapolis band Soul Asylum. The song can be found on their 1989 album, Clam Dip & Other Delights. Hormel never gave in to the workers’ demands, and when the strike ended in June 1986, 700 employees were left without work.[20]

The Hormel Institute is a cancer-research facility operated by the University of Minnesota and Mayo Clinic. It was significantly expanded in 2015-2016.

Austin has recently undergone several notable developments: a new $28 million courthouse and jail were completed in 2010, a new intermediate school opened in 2013, and a major redevelopment project is taking place at the site of the former Oak Park Mall.[21][22]

The city is currently embarking on a community development project called Vision 2020. This grassroots movement was chartered in 2011 to implement ten major new community initiatives that could be completed by the year 2020. The projects involve a variety of projects related to economic development, heath and wellness, education, and tourism. A community recreation center is in progress as well as a tourism and visitor center.[23] One of the stated goals including making the downtown business district more of a destination, aided in part by the relocation of the Spam Museum to Main Street in 2016.[22] Austin MN Homes for Sale

In 2015, the National Association of Realtors named Austin one of the “Top 10 Affordable Small Towns Where You’d Actually Want to Live.”[11] Austin MN Homes for Sale

Austin has a long history of flooding. The Cedar River, along with Dobbins Creek and Turtle Creek, flow through the community, and many homes and businesses were constructed in flood plains. A series of floods between 1978 and 2010 resulted in a major flood mitigation program. This program involved the purchase and demolition of buildings within the flood plain, converting low-lying areas of town to parks, and the installation of a flood wall to protect downtown.[24] Austin MN Homes for Sale

After two major floods occurred in July 1978, city officials and local residents decided to take action. Locals organized the Floodway Action Citizens Task Source (FACTS), who met with local and state leaders, as well as members of the Army Corps of Engineers, but it was decided that major flood prevention measures would not be cost-effective. However, a Community Development Block Grant was won from the Department of Housing and Urban Development, allowing for the buyout of homes lying in the flood plain. City planners also vowed to no longer build new structures in the existing flood plains. In 1983 and 1993, major floods again brought damage to many homes and businesses in Austin. Over 400 homes were affected and a new round of buyouts took place through the Hazard Mitigation Grant Program (HMGP). Austin MN Homes for Sale

The worst flooding on record came several years later when the Cedar River crested at 23.4 feet in the spring of 2000. Many of the worst-hit parts of town were now void of homes and businesses but there was still damage and extensive clean-up required. Flooding came again in September 2004, resulting in two fatalities. Additional protection (dikes) were added along the Cedar River as a result. Austin MN Homes for Sale

The most recent round of serious flooding came in 2010, after which a plan was developed for a permanent flood wall to protect downtown from the floodwaters of the Cedar River and Mill Pond. The wall was completed in 2014.[24][25][26] Austin MN Homes for Sale 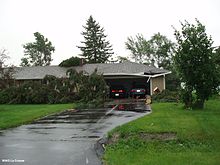 On 20 August 1928, an F-2 sized tornado touched down on Winona Street (1st Ave). The damage ran from the southern edge of Austin High School to the Milwaukee Road railyards on the city’s east side. Buildings ruined or damaged included St. Olaf Lutheran Church, Carnegie Library, Main Street, the spire on Austin’s former courthouse, Grand Theatre (replaced in 1929 with what is now the Paramount Theatre), Austin Utilities, Lincoln School, and several boxcars at the Milwaukee railyards before it dissipated. Austin residents noticed debris raining out of the sky, such as straw and laundry. Austin MN Homes for Sale

Another F-2 touched down in August 1961, at 808 18th St. S.W. It quickly gained strength once on the ground, become an F-3 at 17th St. S.W., where it destroyed a garage. The twister lifted briefly, touching down in the city fairgrounds and hitting the grandstand roof, tearing off parts and damaging beams. Austin MN Homes for Sale

In the summer of 1984, a tornado destroyed Echo Lanes Bowling Alley as it swept through the S.E. part of Austin. Neighboring Bo-Dee Campers had suffered considerable damage as well. The tornado also destroyed Schmidt TV. Austin MN Homes for Sale

A disputed tornado or straight line winds took down massive amounts of branches and trees on 27 June 1998, uprooting smaller trees and knocking large branches across streets. Several side streets in the northwest quarter of the city became impassable, as well as 8th Ave northwest (near Sumner Elementary School), and 14th St. Northwest (between I-90 and 8th Ave). The event caused disruption in Sunday church services the next morning, and many congregations organized clean up activities instead of regularly scheduled events. Austin MN Homes for Sale

A tornado touched down in Glenville on 1 May 2001, gaining strength before it turned into a F-3 headed for Austin. While the twister dissipated shortly after hitting town, notable damage occurred in both cities. Austin MN Homes for Sale

On 17 June 2009, an EF2 tornado touched down outside of Austin and moved across the northwest and northern parts of the city, gradually weakening as it moved east. The worst damage in Austin was about three miles north of downtown. The Visitors Center at the Jay C. Hormel Nature Center sustained damage, with the nature preserve losing some 300 trees. There were a few minor injuries.[27][28] Austin MN Homes for Sale